At first I thought this was some “fake news” aimed at upsetting the female population.

Nope, this was a real article published by a respected journalist.

It’s true, a male writer read some woman’s academic research papers and wrote an article asking “Is PMS Real? Or is it just a figure of our menstruation-fearing culture.” The author of this article, Frank Bures, takes a rather twisted view of the research and states emphatically,  “if it’s a syndrome, it’s almost certainly a cultural one.” 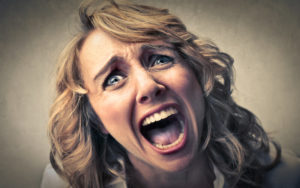 My first reaction when I realized it was real was  “Seriously?”

Can you imagine what has happened to his social life since he published this!

And the best part, he’s married (or at least he was when he published this)

Here’s just a few of the opinions and reactions posted over at ScaryMommy.com

“You see, according to Bures, the fact that women in some parts of the world don’t get diagnosed with PMS is evidence that it’s a “social construction” of cultures that view menstruation as something negative and, therefore, to blame for any bad feelings women have.

He cites various studies that support his view: for example, in one study, women who were told that they were premenstrual when they actually weren’t experienced more PMS symptoms than those who actually were premenstrual but were told they weren’t. I believe the name of that study is, “I Didn’t Have Time To Think Of A Name For This Study Because I Was Being Ruthlessly Kicked Square In The Nads.””

Why would this guy publish this article?  His scientific basis for his conclusions just doesn’t make sense. Just because some cultures deal with PMS differently than others doesn’t mean it doesn’t exist.

Here’s a great video for any man that thinks PMS is an excuse for being in a bad mood!

Let’s get back to the discussion. Here’s some hilarious commentary by some very angry, smart women.

In fact, Bures argues that PMS doesn’t exist in cultures where menstruation is prized, like on the island of Wogeo, Papua, New Guinea, where men fillet their penises in the ocean so they can menstruate, too. Of course, the people of Wogeo also believe that illness is the result of sorcery, trespassing, or “failing to incise one’s penis recently,” so I’m going to go ahead and stick with my OB/GYN for medical advice. Good example, though.

But don’t get all offended, ladies. Bures isn’t saying we’re crazy, what he’s saying is that “just because something is a social construction does not mean we [we, Frank?] don’t experience it—it simply means that our ‘real’ physiological symptoms can have roots in our mind as well as our body.”

Bures says that our current belief in PMS is based on that old sexist idea of “hysteria,” which is a condition women used to be diagnosed with when they got lippy. “Hysteria” means “wandering uterus,” because it was thought that uteruses would wander around women’s bodies making snacks and stuff and then getting lodged in the wrong place, causing one hell of a bad mood. The cure, of course, was intercourse, which Bures says, “supposedly worked.” But “hysteria” is an outdated notion that has long been proven wrong. “Today,” writes Bures, “hysteria is  ever diagnosed, except by unwise husbands.”
Bures believes that PMS symptoms are a matter of suggestion, as when it was first named in 1954 by a British doctor named Katherina Dalton. Once PMS became something that was diagnosable, so did the number of symptoms, which are helpfully listed in the article to include: lack of physical coordination, multiple sclerosis, arguments with friends and family, increased connection to nature and other women, and decreased efficiency. “Estimates of the number of women afflicted,” writes Bures, “ranged from 5 percent to 95 percent.” We see your sarcasm in using the word “afflicted” and we raise it by a “go f**k yourself.”

There are some undisputed facts that Bures seems to ignore. According to the Mayo Clinic and the Office of Women, U.S. Department of Health and Human Services, not only is PMS real, but as much as 85% of women experience at least one symptom.

And if all else fails, ask Bures’s wife who, as he writes at the beginning of the article, responded to his doubts about her PMS with “an icy silence.”

I wonder where they will find his body!

See the original article at Slate.com