Imagine a 52 year old woman who gets in her car and drives to the mailbox at the end of her driveway to get her newspaper and mail. She blames some prescription medication for sapping her energy and her motivation. In a fairly short period of time she became a couch potato with over 40 pounds of extra weight.

One day she decided she’d had enough. 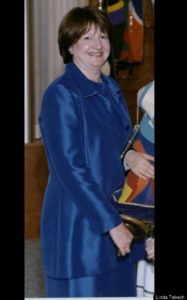 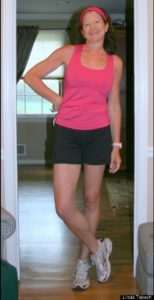 What I like most about Linda Tabach’s story is that it isn’t an overnight success.

She struggled, she really, really struggled.

She started a blog called LemonsLifeLove.com to document her journey.

It is raw and unapologetic.

Each time she failed she found it harder and harder to start again at some other system.

She became angry with all the exercise and fitness blogs aimed at 20 year old women who are already in pretty good shape.

Here’s some excerpts from her story…

“I wanted something for people my age, who were like me,” she said. And being like her, well, there are an awful lot of us. Not obese, not really even overweight until we hit our 40s. Then, a slowing metabolism — or in her case, a new medication — simply triggers a gradual weight gain. When you open your closet, nothing fits anymore. You know you should exercise, but you can just never get started — or you start and stop. Gym memberships, walking with friends, hiking on weekends — you do it for awhile and then something crowds it out of your schedule. And you feel bad all over again.”

“I dabbled in exercise but never liked it — no matter what I tried.”

She kept forcing herself to look at herself in the mirror. That was the trigger that kept her going.

She joined a running program that was designed to take you off the couch and end with your running 5K. She never did run the 5K but started to see small improvements in how she felt about exercise.

She joined another beginner running club for women who couldn’t run a mile. She stuck with it and along with her learning more about nutrition, started to see her weight decrease and fitness increase.

She talks about seeing her doctor after she got in shape and dropped down to her goal weight.

“Her goal weight was set by her doctor, but when she went in to see him after reaching it, he seemed surprised and asked her how she did it. “Uh, by diet and exercise,” she said. The doctor admitted that he sets goal weights for many patients, but few actually reach them.”

She’s kept the weight off and has kept exercising. However, like all things in life, there are still challenges.

They found a cancer tumor on her kidney and she had to have surgery.

She had to go through a recovery stage before she could get back to exercising.

The funny thing is she reports she looked forward to going back to exercising.

A long way from where she started.

She now runs 10K and half marathons.

As Linda puts it

“No matter how old you are, it is not too late to change.”

I have never met her, but I’m very proud of her. Inspiring story!
Here’s another before and after shot…. 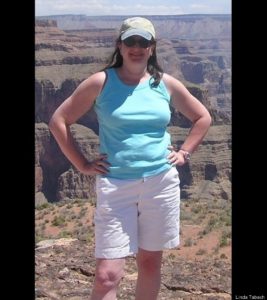 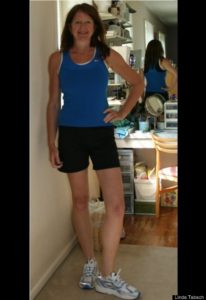